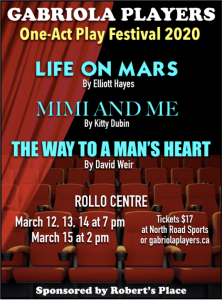 In Life on Mars, written by Elliott Hayes and directed by Donna Deacon, short order cooks Frank (Joe DiCara) and Mike (Scott Rivers) hang out after their shift discussing life, the universe and everything.

In The Way to a Man’s Heart, written by David Weir and directed by Jenn Feenan, Ellie (Lesley Hazeldine) doesn’t see why she should split the winnings from the lottery ticket her ex (Charlie Cheffins) bought her the night they split up.

Don’t miss these three delightful short plays being performed at the Rollo Centre on March 12, 13, 14 and 15!