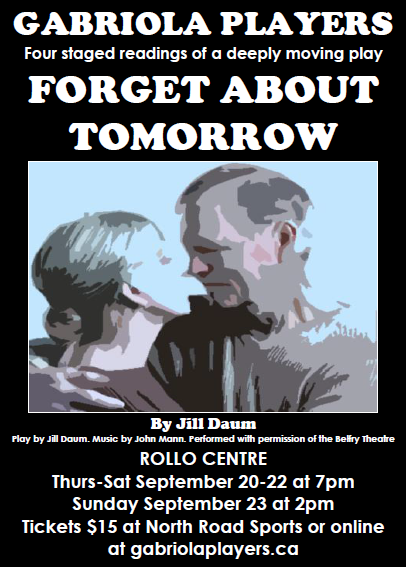 Daum, the wife of Spirit of the West singer John Mann, knows from tragic personal experience the devastating impact a diagnosis of Alzheimer’s can have on a family. This is the subject her play tackles with pathos and with humour. 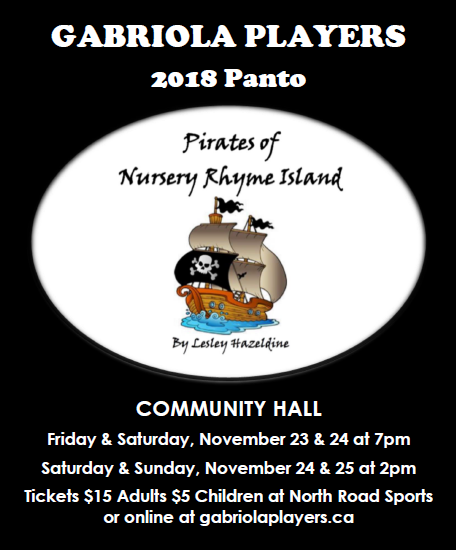 The 2018 panto, Pirates of Nursery Rhyme Island, was written and directed by our very own Lesley Hazeldine. Imagine your favourite nursery rhyme characters fighting off an attack by the villainous Captain Jack Budgie and his motley crew of misfits. Now imagine how much fun the whole family had cheering for the good guys and booing the bad guys! 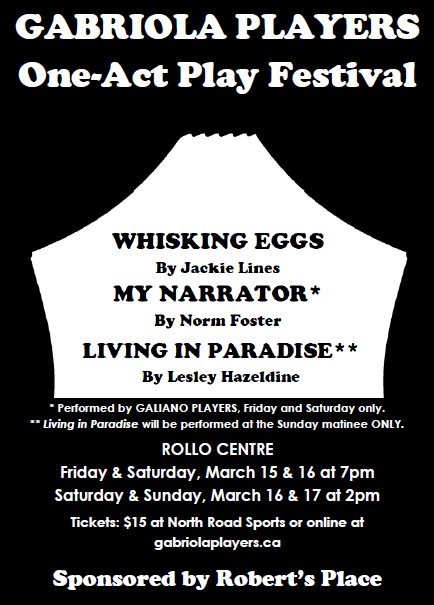 Our ever-popular One-Act Play Festival will featured some special guest stars in 2019: members of Galiano Players, visiting to perform Norm Foster’s comedy My Narrator. Gabriola Players will perform Whisking Eggs by Jackie Lines, directed by Jean Wyenberg. Our Galiano friends coudln’t stay for Sunday, so that matinee featured Whisking Eggs and an encore performance of Living in Paradise. Rollo Centre March 15 to 17.

Norm Foster’s Old Love is a funny, touching story of lost loves, bad relationships, and second chances that spans three decades, and half a dozen meetings between Bud, a salesman, and Molly, his boss’s wife. One of them is smitten from the very first meeting and the other…well, let’s just say is less so. Directed by Donna Deacon. Rollo Centre May 23 to 26.

We were very pleased that the Bard was back in the Garden in 2019. There were three al fresco staged readings of Shakespeare’s comedic masterpiece Love’s Labour’s Lost in the gardens of the Gabriola Commons on Friday and Saturday July 5 & 6 at 6pm and Sunday July 7 at 2pm. As always – bring a blanket and a picnic and enjoy!