Rehearsals are well underway for Christmas Crackers, our live online show which will be performed on Thursday, Friday and Saturday, December 10 to 12 at 7pm and Sunday, December 13 at 2pm. 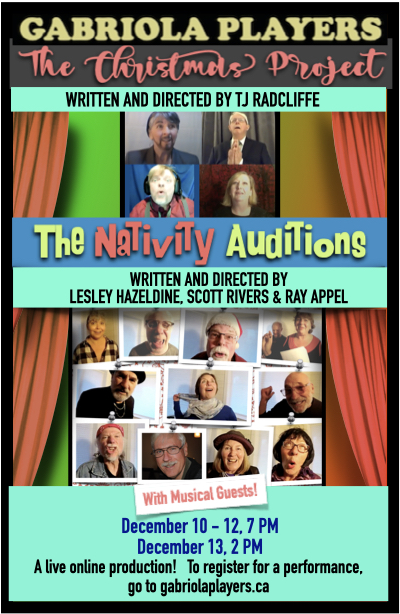 Who knew angels began meeting via celestial Zoom long, long before we did? The Nativity didn’t just happen. A lot of planning went into it, revealed for the first time in TJ Radcliffe’s short play, The Christmas Project, an affectionate look at the angels – including the one who forgot to book a hotel room – who were behind it all.

Thanks to board member Ray Appel, we can offer you a sneak peek.

Ray is also co-author and co-director (along with Lesley Hazeldine and Scott Rivers) of our second play, The Nativity Auditions, in which the local amateur dramatic society is holding auditions for a nativity play. Everyone wants in on the act. In a series of short sketches we discover how wildly inappropriate the wannabe stars are for the roles in which they seek to be cast.

Again, thanks to Ray, we can share some rehearsal footage – and a few bloopers.

Enjoy the previews – and enjoy the show next month!

Tickets (or more accurately the right to view) are $15 and are available now.