In the spring of 2014, as we were making plans for our tenth anniversary season, we decided that we wanted to do something special with our annual one-act play festival in the spring of 2015. We wanted all the plays performed to be written by local authors.

One of the three plays chosen, Lemon Yellow Laces by Dennis Johnston, was entered that autumn in the Vancouver Island One-Act Play Festival in Qualicum Beach where it won the award for Best Original Script, as well as the award for Best Set Design and a nomination for B J Godson as Best Supporting Actress.

B J reported after the competition: “The cast and crew of Lemon Yellow Laces returned from Qualicum with smiling faces and warmed hearts. It was a privilege to be involved in Dennis’s poignant play about homelessness and the stigma attached to being a homeless person.

“The festival judges were very impressed with the performance and commended Gabriola Players for entering a play that was current, thought-provoking, and not the usual ‘safe’ one act play entry, such as a mystery or light comedy.

“It is an invaluable experience to go from a small island with no professional performance space to a ‘real’ theatre, with all the bells and whistles. Performing in front of an audience which does not consist largely of friends, neighbours and relatives (as is often the case when we perform on Gabriola) is nerve-wracking, challenging and exciting. And, on this occasion, rewarding.

“All in all, a positive, bonding experience for the cast and crew, and a proud moment for Gabriola Players.”

And now, for your lockdown viewing pleasure, we’d like to offer you another opportunity to enjoy this heart warming play. 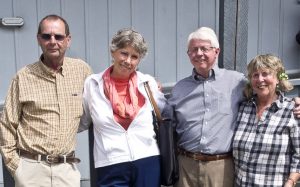