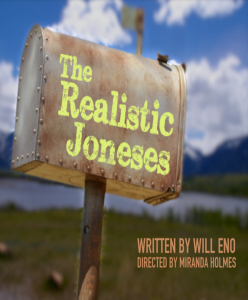 Gabriola Players will be holding auditions on Sunday, March 1st for our May production of Will Eno’s acclaimed play, The Realistic Joneses.

There are four roles to be cast: two male and two female, with age ranges from late thirties to mid-fifties.

To get a better sense of this somewhat weird and entirely wonderful play, please read this abridged New York Times review of the 2014 Broadway production.

The auditions will be held at the Rollo Centre from 4pm to 6pm on Sunday, March 1st.

There will be three rehearsals per week (Tuesday and Thursday evenings and Sunday afternoons) from late March until the performance weekend of May 21-24.