I’m standing in the foyer of the Haven’s Phoenix Auditorium with a small group of women and one of them is showing the rest of us her vagina. It’s larger than life, several shades of pink and boasts a g-spot, a clitoris, plump labia and a urethra.

“It’s a hand puppet,” she says, slipping her fingers into the sleeve attached to the back, “I use it in my workshops.” She is manning the resource table in the foyer of the theatre, exhibiting info about women’s workshops and services available on the island. Like the rest of us, she is here to see Eve Ensler’s acclaimed play, The Vagina Monologues. I discreetly ease away from the group when the vagina Muppet starts moving its lips and threatening to speak. As I take my seat I begin preparing myself for an evening of touchy-feely “women’s” theatre, and wonder if the hundred or so chairs set out are a shade optimistic.

But at 7pm when the doors open the crowd pours in. Women, yes, of all ages and backgrounds, and men as well. The seats fill and more chairs are brought out. The show is held while another wave arrives off the ferry from Nanaimo. Forty people without advance tickets are turned away from the sold-out house.

What is it about this play that has been selling out theatres consistently all over North America since it opened? Is it only the titillation, the thrill, of seeing something taboo?

The premise is simple: a group of women gather on stage and take turns telling us a series of stories, all related to their vaginas. Created out of material gathered from real interviews conducted with more than 300 women, the monologues have been honed into 10 deeply moving texts. They cover a full range of subjects vaginal, from pubic hair to birth. But it is not merely the presentation of risky subject matter that has made the “the ‘logues” so popular. Any prime time TV sitcom shows more leg. What’s more compelling about the play is that the vagina, a taboo subject, is finally being treated as a normal, visible, important public aspect of our lives.

There may not be a more intimate, challenging subject for a stage production, but under the guiding hand of director Dandelion, the Gabriola cast delivered. 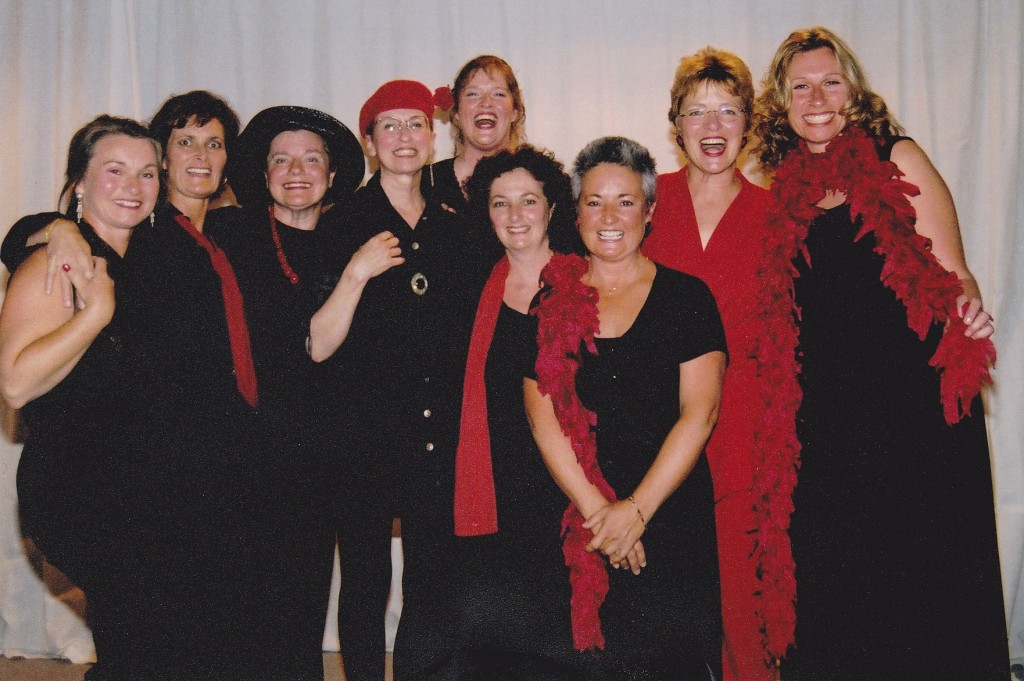 Narrated by the chorus of Jean Wyenberg, Carolyn Avery-Moore and Krysta Reed, this production held together well. Dale Stark opened things beautifully with Hair, the tale of a woman whose husband and therapist convince her to shave her vagina. Resembling a grumpy Gertrude Stein, Ellen Clancy was poignantly hilarious as the old lady who hasn’t seen her “down there” in 50 years. Jennifer Langley kept her upper lip stiff as the Englishwoman taking the vagina workshop, explaining that “…up until this point, everything I’d heard about my vagina had been hearsay and invention.” Robin Kelley was extraordinarily moving in a difficult piece about genocidal rape. Cindy O’Dell gave us a nasty lesson on the perils of personal hygiene, and had a few things to say about “those exams” as well. As for Carolyn Davey as The Woman Who Liked to Make Vaginas Happy, I can only say this: my number is in the book. Call me.

Although some of the stories are stories of suffering, they are also stories of transformation out of suffering. The vagina itself transforms, and during the course of the play, it is many things, indeed: a cellar, a store, an English garden, the Grand Canyon, a village, a diamond, a red leather sofa. It’s surprising, unexpected, mysterious, sweet salvation. It is this spirit of transformation that was realized this weekend at the (aptly named) Phoenix Auditorium. Most striking is that even though there was a range of experience in the cast, from novice to seasoned pro, every actor sank her teeth into the script and performed with passion and commitment.

It was a knockout debut for the newly created Gabriola Players.