For Throwback Thursday this week, we go back to March 2016 when Gabriola Players was proud to mark the 100th anniversary of women first winning the right to vote in Canada with performances of What Glorious Times They Had, Diane Grant’s wonderful tribute to the gutsy women (and men) whose tireless campaigning led to women’s suffrage. The play, which featured Margaret Litt as Nellie McClung, Jean Wyenberg as E. Cora Hind, Joyce Ashley as Lillian Thomas, Donna Deacon as Francis Marian Beynon and Joe DiCara (who grew up in Winnipeg) as Manitoba premier Rodmond Roblin, along with a strong supporting cast, was warmly received.

Here’s what one audience member had to say: “I’m still pondering last night’s performance. Not only did I learn a lot about a subject about which I had only previously been mildly informed, but I truly enjoyed watching a troupe of excellent actors taking on their characters and expertly bringing them to life. The timing was spot on, the voices strong and I have to say, Gabriola’s got some superb talent and a whole lot of it was on stage last night! The set was really well done and the creative ideas (walking around the room, voices from the back, simple yet really effective stage set) not only got the audience involved but made the whole experience a ‘theatre in the round’. Thanks for all the effort I know goes into a production like this.”

There were kudos as well from the playwright, Diane Grant, who wrote to say: “Congratulations! I am so happy that you had such a successful run. The cast looks just terrific!  Thanks for sharing the beautiful photos. I sent them to three of the original cast who thought that you had completely captured the tone and the look of the play. I would love to include them in a report I’m sending to the Manitoba Status of Women. Thanks so much!”

Usually we’re limited to four performances on Gabriola, but that year we had a request from the Museum to perform a scene from the play at their Canada Day celebration, which we happily did. 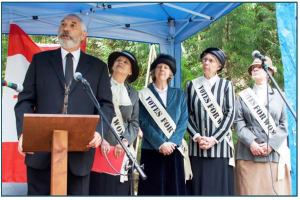 As the campaign for female suffrage gained momentum in Canada, Britain and the United States in late Victorian and Edwardian times, it was no surprise that the male establishment fought back. Their chief weapon wasn’t reason (as there was none), but mockery. Anti-suffragette cartoons began to appear regularly in newspapers, periodicals and pamphlets.

In the run up to the opening of What Glorious Times They Had, Gabriola Players shared a number of these cartoons on our Facebook page, some of which we include today.

Once again, our thanks to Bill Pope for the wonderful photos and Ray Appel for creating this lovely reminder of a truly glorious production.