Gabriola Players will be holding auditions for Ali Baba, the 2019 pantomime, at the Rollo Centre on Sunday, August 18 from 2pm to 4pm. 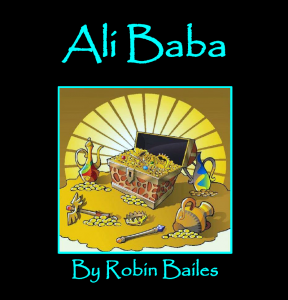 Written by Robin Bailes (author of Will Shakespeare The Panto, Robin Hood and The Return of Robin Hood) and directed by Miranda Holmes, Ali Baba involves a cast of at least 20 actors.

The Forty Thieves and their devilish leader the Desert Wolf are terrorising Baghdad, and it’s up to young Ali Baba and his ragtag Neighbourhood Watch to capture them. Ali hopes to win the hand of the beautiful Princess Jelli Behbi while he’s at it, much to the disappointment of his best friend Margiana. But the source of the problem might be closer to home than Ali suspects; his Uncle Kasim is suspiciously wealthy, and he also has his eye on the Princess.

Roles to be cast

Ali Baba (Principal boy)Ali is brave and loyal and with lots of enthusiasm, but little direction in life. He works in a dead end job for his Uncle and his only real goal is to marry the beautiful Princess, even though there is a far better girl waiting patiently right under his nose. But when destiny strikes Ali rises to the challenge like the hero he is. Singing role.

Margiana (Principal girl) Margiana has been Ali Baba’s best friend all his life but now she wants to be more than friends and Ali doesn’t even notice. She is the Princess’s slave girl but also has a part-time job working at Kasim Baba’s Emporium of Tat. She is quick-witted and smart and always there for her friend Ali, whether he loves her or not. Singing role.

Kasim Baba (Villain) Ali’s evil uncle owns Kasim Baba’s Emporium of Tat, a suspiciously profitable market stall where both Ali and Margiana work. But Kasim has a secret; he is also the Desert Wolf, infamous leader of the Forty Thieves. Kasim also wants to marry the Princess, but for his own evil ends.

Fatima (Dame) Margiana’s mother and Kasim Baba’s housekeeper. She has long held a torch for Kasim but he is not interested, despite the fact that she is, in her own estimation, gorgeous. Fatima is optimistic, plain spoken and wholly unconcerned with rank or title, and likes a man to be a man. Singing role.

Sultan The Sultan is the all-powerful and stupendously wealthy ruler of Baghdad and is only too aware of it. He is big-headed, out of touch with the common man and quite certain of the fact that he is the most important person in the room. Although he is a loving father to Princess Jelli Behbi, he really could do with being taken down a peg. Singing role.

Princess Jelli Behbi The Princess is the Sultan’s daughter and has inherited his love of money and lack of the common touch. She is a little dizzy but makes up for it by being basically nice and, all are agreed, the most beautiful girl in the world. Singing role.

Mustapha The Sultan’s weak-willed and mild mannered Grand Vizier. Not really strong enough to fulfil the duties of Grand Vizier he is fired by the Sultan and must prove himself. He develops a soft spot for Margiana’s mother Fatima. Singing role.

Mr Blue One of the thieves who definitely sees himself as their leading light and the Desert Wolf’s deputy. He is in fact no such thing; he is jumped up, argumentative and not that bright.

Miss Scarlett Mr Blue’s deadly rival in the competition for who is the Desert Wolf’s right hand person. She is just as certain that she is second in command and just as wrong. Like Mr Blue she is officious and argumentative but, perhaps, a little brighter.

Mr Pink Mr Pink is undoubtedly the most intelligent of the principal thieves but wouldn’t want to put himself forward. A stylish dresser, he is easily distracted by more important things like fashion.

Mr Happy As his name implies Mr Happy has not quite got this whole ‘desperado on the run from the law’ thing that goes along with being a thief, but he does his best. He is the thick one, but in this gang that’s a relative measure.

Emperor of France and

Czar of Russia Four rulers visiting Baghdad for the Sultan’s birthday, who’ve had an unfortunate experience on their journey.

Bob: A pirate and disgruntled customer of Kasim Baba’s Emporium of Tat.