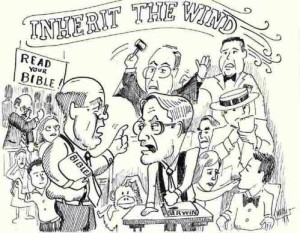 In the 1950s a dark cloud hung over the United States. Post-war prosperity was blighted by the “red-under-the-bed” paranoia whipped up by Senator Joseph McCarthy and the raised profile he gave to the House Un-American Activities Committee. (Amongst the thought crimes dreamt up by HUAC was being “premature anti-fascism”. I kid you not.)
Attempts to counter their paranoid nonsense with rational thought could be career-ending – particularly for government employees and for people in the arts. A few brave souls tried, although not necessarily coming at it head on.

In 1953 Arthur Miller used the 17th century Salem witch trials as an allegory to illustrate how easily a community can be whipped into a mindless frenzy.

The playwrights Jerome Lawrence and Robert E. Lee reached back only 30 years for an illustration  of the perils of ideology triumphing over reason: the infamous Scopes “monkey” trial.

In a preface to their play, they stated: “Inherit the Wind is not history. The events which took place in Dayton, Tennessee during the scorching summer of 1925 are clearly the genesis of this play. It has, however, an exodus entirely its own … The issues raised by  Bryan and Darrow in Dayton have acquired new dimension and meaning in the 30 years since they clashed at the Rhea County Courthouse. Inherit the Wind does not pretend to be journalism. It is theatre. It is not 1925. The stage directions set the time as ‘Not too long ago.’ It might have been yesterday. It could be tomorrow.”

It could certainly be today. In many US states, fundamentalists are still pushing for “Intelligent Design” (creationism by any other name) to be taught in public school science classes and given equal weight with evolution.

The fact that none of these Bills passed is encouraging. The fact that they are being introduced at all in the 21st century is not.

Alarm bells rang in Canada’s science community in 2009 when then Conservative Science Minister Gary Goodyear refused to tell a reporter if he believed in evolution. Looking back now this incident seems at worst embarrassing, at best quaint.

Since winning a long-sought majority in May 2011, the Harper government has been singing the same hymn: Oil sands, oil sand, über alles.

Fossil fuel fanaticism and religious fundamentalism have at least one thing in common: the denial of inconvenient truths.

The Harper regime hasn’t bothered to put science on trial. They’ve simply locked science up and thrown away the key.

For all these reasons (plus the homophobic Bible quotes scrawled on posters at last year’s Theatre Festival), I decided to undertake directing a production of Inherit the Wind for Gabriola Players.

The challenge of directing has been daunting, but the enthusiasm of the cast has transformed my idea into an inspiring reality.

If only the challenge of reinstituting science-based policy decisions in Canada could be so easily and beautifully solved.