As part of our lockdown look back at the days when we could perform plays, this week Miranda Holmes has written about the impetus behind her decision to bring Inherit the Wind to Gabriola and shares memories of directing her first play and of the amazing, dedicated cast and crew who turned the words written by Jerome Lawrence and Robert E. Lee into a piece of theatre magic.

In the summer of 2013 there were a number of surprising and alarming homophobic incidents on Gabriola, including the repeated defacing of posters for Sheila Norgate’s theatre festival production of Lesbian Etiquette Part 2 with bible quotes. I was one of the vast majority of Gabriolans who found this deeply disturbing. A letter to the editor hardly covered my dismay.

One day while this was going on I was chatting on the phone with Mark Smith, who’d recently appeared in a Gabriola Players production of The Gin Game. He told me it was one of a number of roles that he’d always wanted to play. Amongst the other roles was Atticus Finch. I told him the optics might not be great of a 72-year-old man having a young daughter (even assuming a young actor could be found to play Scout) and that perhaps he might have to let Atticus go.

At that point, with my head in courtroom dramas, I suddenly had an inspiration. I couldn’t remember the name of the play so I said, “Oh, my god. Spencer Tracey. Monkey trial!” Mark filled in the missing title: Inherit the Wind. Turned out he had a copy of the film, which I immediately borrowed and watched. Yes! This was it. This play, a fictionalised version of the infamous trial of a schoolteacher for daring to expose his students to Darwin’s theory of evolution, was the response we needed to the homophobic bible quotes.

Granted, the multiple locations were a bit daunting, but films of plays are always opened out beyond the theatre sets. I needed to read the script, which I ordered. When I read it, it was still rather daunting: dozens of characters, multiple sets, but I didn’t care. Come hell or high water, I was going to direct a production of Inherit the Wind.

I had never directed a play before. A good way to break into the role would be to try directing a one-act play with a couple of characters. Not me. Oh, no. I was going to make my debut as a director with this massive undertaking.

One of the first people I told about my plan was Donna Deacon, who I hoped would audition for the role of the journalist E. K. Hornbeck. I loaned her my copy of the script to take home and read. A few days later in the village I ran into her and her partner Garry Davey, a professional actor. As soon as he saw me, Garry said he very much wanted to be involved in the production.

Well, this was good news. With some weeks to go before auditions were even held, I had two strong candidates for the roles of Henry Drummond and Matthew Brady, the main protagonists.

My biggest worry at that point was finding the right person to play Reverend Brown, the fire and brimstone preacher.

Imagine my delight on the day of the auditions when Victor Anthony walked in the door. He’d only read about three lines in a scene involving Reverend Brown when I leant over to my producer and whispered, “I’ve never directed anything before, but I think I’m having an audition orgasm.” Victor was absolutely perfect for the role.

I wasn’t the only newbie involved in Inherit the Wind. Nearly half the cast, a number of whom took on multiple small roles, had never appeared on a stage before.

This play was a true labour of love for everyone involved, both cast and crew, but none more so than Victor. He’d grown up twenty miles away from Dayton, Tennessee, the town where the real Scopes “monkey trial” took place in 1925. He’d also grown up with preachers like Reverend Brown and knew how evil and thoroughly unchristian they could be, as he explained in this interview he gave to the Sounder shortly before we performed the play. (Do, please, click on the link. It’s a lovely interview and a wonderful memory of Victor.)

And, as I explained in a column in the Shingle, whilst the driving force behind Jerome Lawrence and Robert E. Lee writing a play in the 1950s about a trial that took place in the 1920s might have been to challenge the hysteria of McCarthyism, the play was still almost shockingly relevant in 2014. It still is. 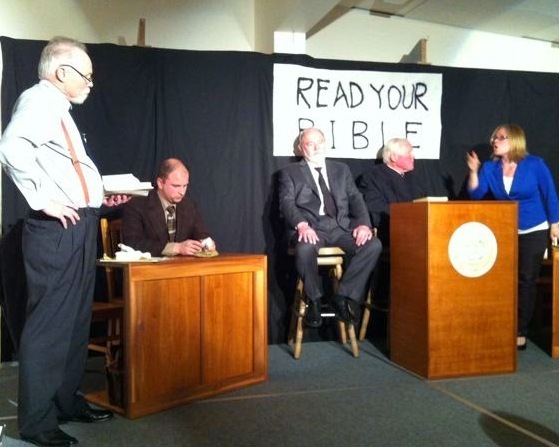 All four performances of the play in March 2014 were sold out before opening night. Audiences (and the editors of the Sounder and the Shingle agreed) that they had witnessed a piece of theatre magic.

Since I first got involved with Gabriola Players in 2011 I have acted in and directed many plays, including two plays I wrote. I’ve enjoyed and been proud of each and every one of these productions. That said, when the final curtain comes down, nothing I’ve done will have quite so special a place in my heart as the one reserved for Inherit the Wind and the cast and crew who put everything they had into it.

My thanks to Ray Appel for putting together a reminder of a truly special production. Click here and enjoy.