We gave it our best shot. We really did.

TJ Radcliffe’s short play The Christmas Project was written specifically to be performed via Zoom (like the two plays we performed online in September), so that was reasonably straightforward.

The writers and directors of The Nativity Auditions wanted to offer something a bit different. They wanted to broadcast live from the Arts and Heritage building and negotiated how they would do so safely with the Arts Council. Strict protocols would be observed: Never more than four people in the building at once (the director, the cameraman, the actor playing “the director”, and one “actor” at a time, auditioning for a role). Everyone would be at least six feet apart. As one “audition” ended, the wannabe star would exit at the rear as the next wannabe star entered from the front. Straightforward and very safe.

Then further pandemic restrictions were introduced and the Arts Council was forced to close the building to any and all uses for the foreseeable.

Never mind, decided the intrepid writers/directors. One of them has a large, covered porch. We’d broadcast from there! Rehearsals proceeded apace. Of course, there was always the possibility that heavy snowfall or a crazy downpour could mess with the plan, so last weekend, as a precaution, the “auditions” were all filmed. Just in case.

Then on Monday – the day of our tech rehearsal – the Covid guidelines changed again. British Columbians were told we should not get together with anyone with whom we don’t already live – not even in parks or backyards.

Once again, like last March, when the rules changed halfway through our one-act play festival compelling us to cancel the final two performances, we are reminded, as Robbie Burns once explained to a mouse, the best laid schemes o’ Mice an’ Men do indeed gang aft agley.

Our four broadcasts of CHRISTMAS CRACKERS will begin tomorrow evening at 7pm. 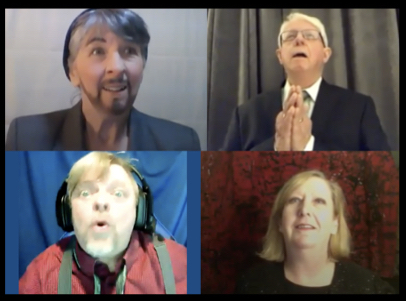 This will be followed by a recorded version of The Nativity Auditions. Theatre in the time of a pandemic. It breaks our heart, but whaddaya gonna do? The show must go on. Thank heavens for that “in case of emergency” filming last weekend. 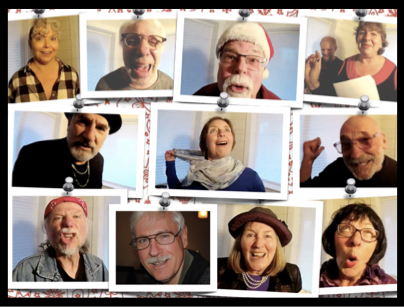 “Doors” open at 6:45pm tomorrow, Friday and Saturday and at 1:45pm on Sunday with 15 minutes of pre-show music – recordings by local artists of some seasonal favourites, including ‘Gabriola Christmas’ and ‘Drumbeg Solstice’.

We don’t have to say “enjoy the show”, because we know you will.

If you haven’t already purchased your ticket for (or, more accurately, right to view) one of the performances, you can do so by clicking the button on the right of the screen.

To receive a quarterly Newsletter, fill in the form below: