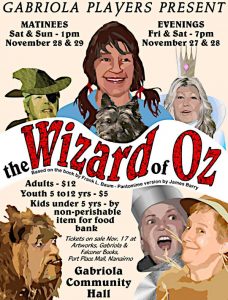 It has been 70 years since the the original Wizard of Oz by Frank L. Baum delighted our screens. This pantomime version of the Wizard of Oz by James Barry takes its inspiration from Baum’s book in which Dorothy and her dog Toto, set off to find the Wizard of Oz. After meeting the “Mudge-kins”, Dorothy sets off on the yellow brick road and on her way is joined by Scarecrow (who is looking for a new brain), Tinman (who wants a heart), and the Lion who is in need of courage. But, along the way, they cross paths with the Wicked Witch of the West and her flying monkeys! This is a good family show with plenty of audience participation and you are sure to have lots of fun. What a wonderful way to kick off the holiday season! 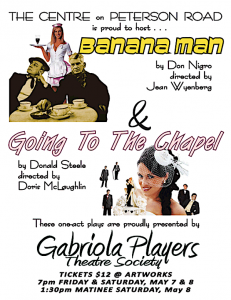 BANANA MAN by Don Nigro. Directed by Jean Wyenberg. Synopsis: In New York, in the summer of 1964, an aging Buster Keaton appeared in a short experimental film written by Samuel Beckett. In this play, set in an Italian restaurant in Greenwich Village that summer, two gentlemen named Sam and Buster attempt to communicate with each other, with the unlikely help of a chatty young waitress with theatrical ambitions, who mistakes Buster for Moe from the Three Stooges and Sam for his agent.A funny and moving play about the quiet, absurd heroism of two apparently very different but very great artists. Featuring Christine McKim as the waitress, Steve O’Neill as Buster and Paul O’Sullivan.

GOING TO THE CHAPEL by Donald Steele, directed by Doris McLaughlin. Synopsis: Minutes before Julie is about to take her fifth walk down the aisle, she and her always-at-her-side Matron of Honour, Jan, examine love and life and their friendship – each learning some things they didn’t know about each other, or themselves. The Philipstown Depot Theatre’s production of Going To The Chapel was voted Best Short Production at the Theatre Association of New York State Festival in November 2004. It was also voted Audience Favorite Production. Marlyn Farrell and Nancy Jenner bring these two women to life under. 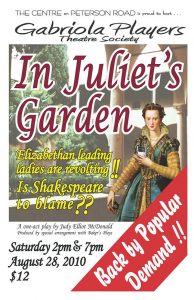 IN JULIET’S GARDEN by Judy Elliot McDonald. Directed by Catherine Andersen. Synopsis: Judy Elliot Mc Donald’s one act play ‘In Juliet’s Garden’ was performed by Gabriola Players at the Gabriola Theatre Festival. This delightful play sees Juliet Capulet invite four other heroines from Shakespeare’s classics, Katherina, Portia, Ophelia and Desdemona to lunch in her garden in Verona where they discuss “issues” they all have with their plots. Skakespeare sends his literary agent to the meeting but declines to attend himself. A prologue and music in the Elizabethan style will enhance this lively one act comedy, along with music produced  by the Steves Smith & Elder.