Gabriola Players’ most ambitious panto yet! BIG cast, lots of music and terrible jokes! The quintessential “bad guy” whose stingy old life is turned upside down by all sorts of “good guys” and zany characters – including the obligatory (but slightly off kilter) three ghosts. Costumes that will blow your minds. 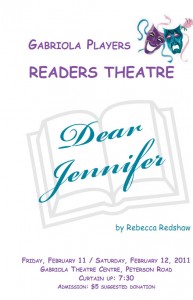 Dear Jennifer was an ideal play to launch the Gabriola Players Readers Theatre initiative. Tthe story is told through a series of letters written to the title character. The year is 1984, an especially challenging period in Jennifer’s life when she is supporting, and decides to marry, a dear friend who is suffering from AIDS. Given that the disease was first reported in 1981, the letters written to Jennifer by family, friends and various officials are an extremely poignant reminder of the early days when AIDS was misrepresented and misunderstood.

The performance included a meet and greet with playwright Rebecca Redshaw, who participated in an audience-generated Q&A following the play reading. This was a rare opportunity to interact with a published playwright.

When first performed on Broadway in 1965, Neil Simon’s The Odd Couple was a huge success. It has since been revised as a Hollywood movie, a television series, as well as other spin-offs featuring one or more of the same cast of actors. In this 1985 female version, neat freak Felix Ungar and his easy-going and slovenly friend Oscar Madison are replaced by New Yorkers Florence Unger and Olive Madison (Jenn Feenan and Jean Wyenberg). The mismatched pair, together with their circle of long-time girlfriends, enjoy weekly get-togethers for gossip and a game of Trivial Pursuit, typically with uproarious results. Of course, there has to be a love interest, provided by Olive’s upstairs neighbours, the Spanish brothers Manolo and Jesus Costazuela, comically played by Paul O’Sullivan and Steve O’Neill.

My Narrator by Norm Foster is a smart, fast-paced comedy that takes flight from the first lines when the socially inept Miles, a salesman in a clothing store, blurts and stumbles his way to selling a shirt to Lacy – a talented landscape painter who is stuck in her own personal and professional rut. Providing some colourful commentary on the sputtering relationship between Lacy and Miles is Lacy’s inner narrator, Barb. Along the road to their third date, and beyond, loser Miles is joined by his own narrating inner voice, Bob, who manages to coach him into a stalemate with Lacy. The only trouble is, the inner voices themselves have fallen in love by this point, so it’s in their own best interests to ensure the romance gets back on track. My Narrator demonstrates why Foster continues to be regarded as one of the funniest writers of intelligent comedy in Canadian theatre today.