The Gabriola Players are bringing something “extra special” to this year’s spring production – along with two new plays which will be performed live online.

What started out as an idea last winter for a 10-minute pre-recorded sketch blossomed into Gabriola’s very own half-hour game show: Gabriola Squares.

Miranda Holmes with Gabriola Players said this was “a massive undertaking. Pandemic protocols meant that each participant had to be filmed separately and these dozens of pieces of film edited together into a cohesive whole.”

Ray Appel and Scott Rivers are the creative team behind Gabriola Squares. This past week, they answered a number of questions from the Sounder about this unique show. 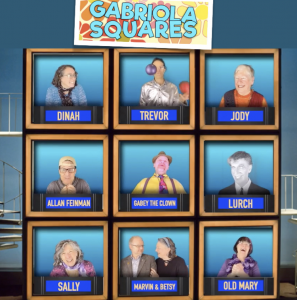 Ray We were thinking of a way to create a film that could be made during Covid (in terms of isolation). We wanted something that maybe looked like Zoom, but was very different We both enjoy 70s shows, and we have fond memories of Hollywood Squares as kids. From the beginning we wanted a Gabriola theme, with Gabriola questions. In a way, it’s to show our love for Gabriola: both the people and the geography.

Scott It actually started with the grid idea. How can we take what is a bit of a limitation for a theatre piece and make it a plus? The Brady Bunch opening came to mind but then Hollywood Squares popped up as an idea and it was an instant “Yes!”  Doing a grid game show would allow a huge variety of funny characters and interactions, the inclusion of a large number of people, and would be instantly recognizable to our potential audience as a selling point. It was a way to do something entirely original but make it seem familiar so people would want to watch.

Scott Ray wanted to go more universal with the questions to have broad appeal, but I wanted to focus entirely on local – aim it at our audience. I think there’s enough quirkiness to Gabriola Island to make it funny and fascinating – kind of like our version of Schitt’s Creek or Corner Gas or even Green Acres. In the end we went primarily with Gabriola, but threw in some broader questions and answers since on Zoom we’re potentially global in our reach. Or so we’d like to think.

Ray From the beginning, we looked at the technology because we had to make 20 individual movies of 20 different characters Many of the characters had multiple lines and different reaction shots throughout, so we had to see if it could even work. We planned on maybe two weeks of editing. We were way off!

Scott Yeah, it was more like two months!  But we had a blast working on it together several times a week. We think very much alike, but there’s maybe 10% where we disagree so after maybe a bit of tension we end up with some hybridized idea that may be better than what we had planned. We discovered that we’re a great creative team and have a huge amount of fun doing it.

Ray Early on, we bought a green screen and two large lights with diffusers. It was the best thing we did!  It boosted the production value astronomically. But what about the software? I have a Mac and make a lot of use of two simple, inexpensive programs (iMovie and Keynote). We tested it and it worked. It actually looked as though we were in separate boxes within the game show!

Scott Ray’s the techy genius. He did the research to make the graphics work. I think the original idea was mine, but he took it and created a graphic mock up and showed it to me a day or two later and I was blown away!  I’m more of an idea and joke guy – I’m good with word play and dialogue, as is Ray – but without Ray this wouldn’t have flown. The combination of our strengths was electric.

Ray We wrote the script by projecting it onto a wall connected to a laptop so we could be six feet apart. We took our brainstormed questions and built a script around that in early January. We began filming each character separately in February and spent two months editing everything together

Scott We just sat there laughing and trying out dialogue and going “Oh! Oh! Oh! Wait!” and tossing out alternative responses and triggering each other until we got the funniest, most concise dialogue and reactions. We wanted ridiculous comical, but also genuine and believable – the characters had to believe what they were doing. We also decided to treat each character with absolute respect and dignity. Nobody would be a joke in themselves, that was important to us.

Ray As we were brainstorming early on, we thought we’d possibly have a mixture of Gabriola questions and other more generic questions. Two of those generic questions are still left in the show. Some of the questions we did not end up using were: What is the area of Gabriola? What was the major employer on Gabriola until the mid-70s? Where you find Twin Beaches? Name three types of trees found on Gabriola. Malcolm Lowry wrote a book about Gabriola called…? What produced 80,000 high quality bricks?  The questions we ended up using allowed for more humour and were much more interesting.

Scott We also had some “racier” sexier questions that were hugely funny, but that we decided to eliminate because we’re aiming for a family audience, plus we had enough great material that we didn’t need to slip over into the provocative stuff. Two examples that I won’t elaborate on were jokes built on Cox Bay and Whalebone, ha, ha. They made us laugh, but we decided not to go there.

Ray Back in January, I asked David Botten if we could create a question about naming a band that he has been in. David loved the idea and the germ of that began when I created some art back in 2019 David supplied the answers to the question as he’s been in many bands. The last text David sent me a few days before he passed away was two or three other bands that he was part of (in addition to the five he had already given me earlier). We dedicated the film to David.

Ray We both love Gabriola. We wanted to honour the community while having some fun. We’ve had a tough year. A lot of events were shut down. In the spring we’ve had some terrible news of events in our community. We hope this film brings some joy back into our lives as we negotiate towards “normal” lives again on Gabriola

Scott I think that we all know we live on a very special island, but making it the focus of a comedy experience that also provided fascinating facts that a lot of residents might not know was fodder for great flights of imagination. The limitations on all of us since Covid began have been very challenging on a great many levels, but like anything else, it’s what you do with that that counts. Make lemons into lemonade – make a limiting Zoom grid format into a crazy riff on an iconic 70s game show!  We all have to work with what we’ve got.

Scott Just that we’re thrilled to have worked with so many fun and talented individuals – 18 in all – probably half of whom have never performed in this type of format before. Some never at all!  We got some Gabriola Players regulars plus local musicians and entertainers and even a local restaurant owner, a popular Facebook personality and one of my best friends’ 81-year-old mom – who is also one of my best friends! During a difficult socially isolated year it let us connect joyfully with many, many wonderful people and do something fun.

Ray It was indeed a labour of love! Scott and I worked together really well all along the way. We’ve each had experience writing before and it really helped We weren’t afraid to write, and that’s important! We can’t wait until our next production. Ideas are already brewing!