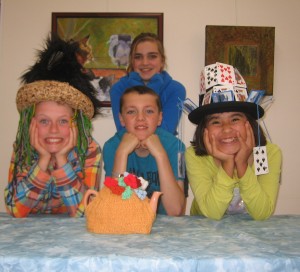 Earlier this year, four intrepid youngsters signed up to take part in the launch of the Gabriola Players youth group program. This pilot project by the community theatre group was designed to introduce island youth to the skills required and fun to be had in staging a performance.

“There is a reason it’s called a play,” Ginny Lowes, program co-ordinator, explained to the youngsters at their first session. She promised them fun, and fun they’ve had in the intervening months. The pilot project is nearly over, but there is still a great deal of fun to be had.

Emma and Sam Hooton (who cut their theatrical teeth in Aladdin, last year’s pantomime), Virginia White and Thor Zupanec will soon be staging their first public performance. Themed as a Mad Hatter’s Tea Party, the youngsters will entertain with renderings of decidedly silly poems by Lewis Carroll, Ogden Nash and Laura Elizabeth Richards.

Gabriolans are invited to come out and show their support on Sunday, June 30 at 2 p.m. at the Rollo Centre. Don’t forget to wear your own mad hat.

Thanks to the many island businesses who have supported the youth group, there will be prizes for the maddest hats and door prizes too, not to mention the obligatory tea and some wonderful sweet treats.

Entry is by donation and all money raised will be used to fund further youth group activities.