Gabriola Players was saddened this week to hear about the death of Dandelion, the woman who was the driving force (and force of nature) behind our founding.

Chris Morrison, a warm, passionate and talented individual, decided when she moved to Gabriola in the early 2000s that she would live here under her chosen new name of Dandelion.  Few people know this but her chosen last name was Kokopelli, a fertility deity, usually depicted as a humpbacked flute player who is venerated by Native American cultures in the Southwestern United States.  At the time Dandelion was also part of an intentional community in southern New Mexico called City of the Sun.

Dandelion, a director, actor and playwright, had a deep love of theatre which she brought with her to Gabriola, leading to the creation of Gabriola Players. The first play she directed here, performed by a very mixed group of women, was Eve Ensler’s The Vagina Monologues. 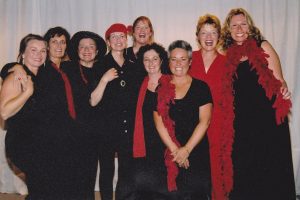 Dandelion recruited women who were experienced actors and women who had never participated in theatre at all and coaxed and charmed and massaged the group into one capable of putting on stunning performances at the Phoenix Theatre in 2004.  The two completely sold out (over sold really) shows were enthusiastically received by islanders somewhat starved for theatre and were the beginnings of what is now known as Gabriola Players. (In 2014 we honoured Dandelion by launching our tenth anniversary season with a revival of this play.) 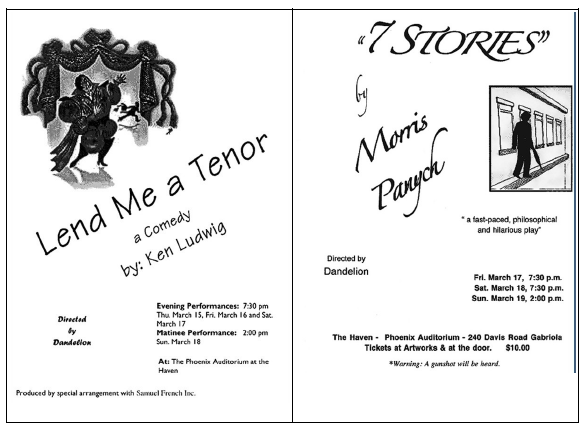 Long time Islanders will also remember Seven Stories and Lend Me a Tenor, two wonderful productions with full sets also performed at the Phoenix Theatre.   Dandelion also introduced the one act play festival with shows at the Rose Crystal Studio and the former Roxy (where the Gabe Shop currently resides).

So we have a lot to be thankful to Dandelion for and we know she will be missed by those whose lives she touched in the many places that she lived in her journey through life.