Three years ago Gabriola Players invited some members to come to a table read of scenes from three plays we were considering performing. One of those plays was The Realistic Joneses by Will Eno. At the end of the first scene we read most people, including the actors, were crying with laughter. It was immediately decided that The Realistic Joneses would be our full production in May 2020. And then Covid.

No one forgot about the play and we are happy to say our 2022/23 will kick off this month with two staged readings of The Realistic Joneses. 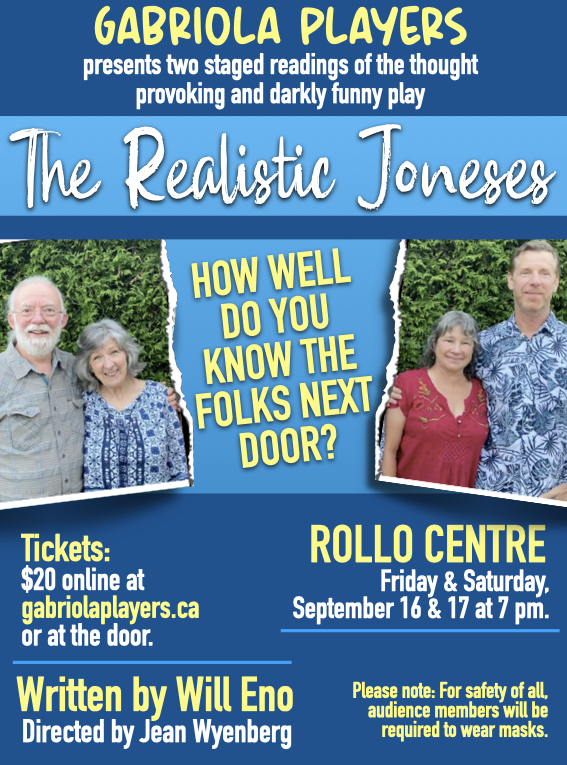 As a reviewer said in the New York Times when it opened on Broadway: “Plays as funny and moving, as wonderful and weird as The Realistic Joneses by Will Eno do not appear often.” (To read more of the review, click here.)

The play begins in the backyard of Bob and Jennifer Jones, a couple who have, it is revealed, moved to this “little town near the mountains” because Bob has a rare degenerative disease, and a leading doctor in the field lives there. Their quiet evening is interrupted by the arrival of their new neighbours, John and Pony – also named Jones.

Through a series of scenes Bob and Jennifer and John and Pony talk. And talk and talk. But what are they actually saying? That is the mystery and delight of the play. No one, including the speakers, is actually sure.

The staged readings of The Realistic Joneses will be performed at the Rollo Centre on Friday and Saturday, September 16 and 17 at 7pm. Tickets are $20 and are available online here or at the door.

Please note that for safety reasons, audience members will be required to wear masks during the performances.

The Realistic Joneses by Will Eno