There will be four online performances next month of SPRING FORWARD, the Gabriola Players One-Act Play Festival featuring three new plays by Gabriola writers: Thursday, Friday and Saturday, May 20 to 22 at 7pm and Sunday, May 23 at 2pm. 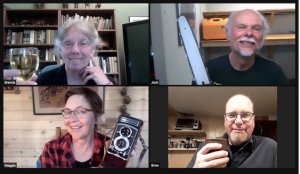 The show will begin with a live performance of Social Distance by Wendy Phillips, directed by Jean Wyenberg and featuring Joyce Ashley, Don Moser, Wendy and Dean Clark. In the play, we meet, Maggie, who has recently left an unhappy life behind in the city in exchange for a cabin on a remote island. But in spite of the pandemic, she’s not getting the personal space she needs. Her son wants her childcare skills and her moral support. Her old friend wants her to start an online art career. And her new neighbour has plans that are definitely up close and personal. Does Maggie have what it takes to live her own life? And how much social distance is enough? 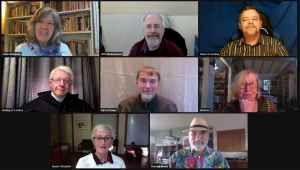 Next up will be A Divine Comedy, written and directed by Anne M. Holmes. In the play, theatres are about to reopen, but the first read through of a new one-act about Shakespeare’s long lost religious play is taking place on Zoom. With performances by Donna Deacon, Tom Radcliffe, Kerry Woodrow, Dave Innell, Paul O’Sullivan, Catherine Anderson and Joe DiCara. 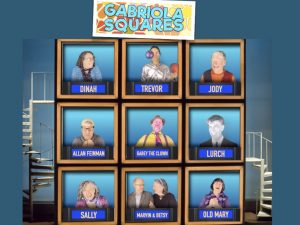 And finally, sit back and enjoy Gabriola’s very own game show, Gabriola Squares, a labour of love for creators Scott Rivers and Ray Appel. As Ray describes it, this is a show where “the contestants are challenged, the points are tallied, the laughs spill out and the stars abound! Over 25 questions about life on Gabriola!” Scott and Ray guarantee you’ll love this game show about life in paradise!

Tickets for SPRING FORWARD are $15 and can be purchased now on our website. (Like to make a donation as you’ll be watching as a family? You can do so here.)

Our thanks for their support of the Festival to

NB: Don’t worry if you forget to mark your calendar! Everyone who purchases a ticket for one of the live online performances will be sent a link in the following days to watch a recording.

Can’t wait until next month to see us performing one-act plays?

Don’t forget we’ve made four of our previous plays by local authors available to watch on our YouTube channel. Just click on the title. Lemon Yellow Laces by Dennis Johnstone was performed in 2015 and was the winner of the Best Original Script Award at the 2015 Qualicum One-Act Play competition. The Family Visit by Lesley Hazeldine was performed in 2016. An Unhelpful Complication by Anne M. Holmes was performed by Gabriola Players in 2017 and was a finalist in the 2018 Canadian National Playwriting Competition. Living in Paradise, also by Lesley Hazeldine, was performed on Gabriola and Galiano Islands in 2018.