There’s a reason why Canadian playwright Norm Foster’s work is so widely produced (and why there is a summer festival in Ontario dedicated to his plays) and the reason is simple: his plays are simply delightful. As described on the festival website: Humour with heart.

Over the years Gabriola Players has performed a number of Foster’s full length and one-act plays. None were more popular with audiences than our 10th anniversary production of Jenny’s House of Joy. 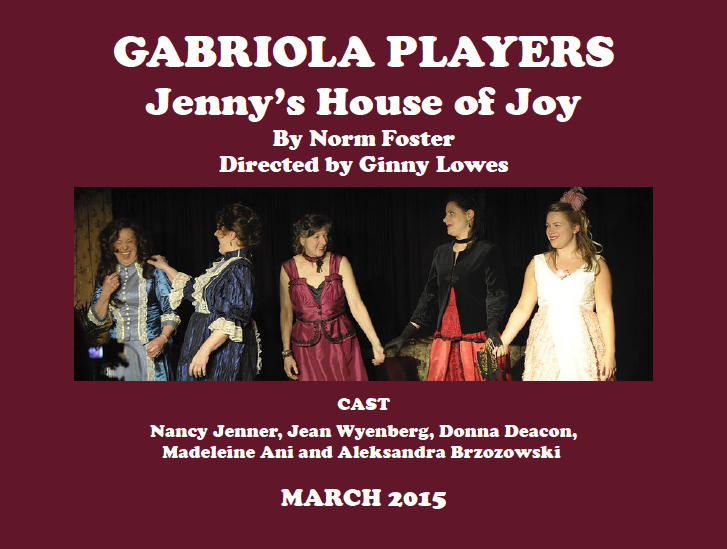 Along with today’s Throwback Thursday slideshow, produced by Ray Appel (with photos by Bill Pope), Donna Deacon shares some memories of her involvement in the show.

“The first time I read Jenny’s House of Joy, I fell in love with Frances, a hard livin’, hard drinkin’ woman working in an 1890s Kansas whorehouse. I knew that if I ever got the chance to play her, it would be the role of a lifetime. So, when Ginny Lowes announced she would be directing this Norm Foster comedy I jumped at the chance to audition.

“Jenny’s House of Joy has it all: laughter, tears, whiskey, strong women and tabacca-chawin’ cowboys. Frances is a straight shooter who takes no prisoners and doesn’t stand for whores getting above themselves with high-falutin’ ideas like book learnin’ and tryin’ to better themselves. So, when two pretty, younger women at the whorehouse seem to be attracting all the cowboys, Frances feels her livelihood slipping away. As she puts it so eloquently, ‘She ain’t gettin’ any younger and she don’t like competition.’

“As usual when working with Norm Foster’s material, the script challenges the actor to go deeper with your work and embark on a real journey. Playing a woman like Frances meant getting to her core. On the surface she’s prickly and jaded but underneath she’s vulnerable, caring and fiercely loyal to the other women whom she considers family. Playing alongside talented cast members Jean Wyenberg, Aleksandra Brzozowski, Madeline Ani and the incomparable Nancy Jenner was a great learning experience for me and an absolute joy.”

We received rave reviews for the play, including this lovely letter from one audience member.

What a terrific play I saw yesterday: Jenny’s House of Joy! From start to finish a sheer delight – funny, sassy and poignant. Costumes were spot on curvalicious, colourful and smart.

Donna Deacon as Frances was a perfect cynical, hard-bitten, been-there-done-that, but under that toughness a big, big heart. Aleksandra Brozowski’s young and beautiful Anita, the ingénue of the bawdy house, was played perfectly. She wanted a different life and you were rooting for her all the way. Madeleine Ani’s Natalie was so straight and tall, perfectly coifed, beautifully coutured and in control, thrust into survivor mode and carving out her niche. As for Jenny, no one could have possibly played that part to such perfection as Jean Wyenberg did. Businesswoman, you bet. Cared for “her” girls, you bet. Just the right amount of sarcasm and always in control. Wonderfully portrayed. Nancy Jenner as Clara, the older woman so devastated by betrayal by her spouse. Pushed to the brink when she saw no other way. Perfectly characterized by Nancy.

Kudos to director Ginny Lowes who knew just how to bring each actor’s performance to its titillating peak and take the audience right along, so we all thought we were in Baxter Springs at Jenny’s House Of Joy. Just a fantastic performance.

Thank you for such a fun afternoon with Gabriola Players.

The very best to all and more great shows to come.

The only complaint anyone heard was from Antony Holland who, whilst thoroughly enjoying the play, bemoaned the fact that the brothels of his wartime youth bore no resemblance to Jenny’s House of Joy.