Our last Throwback Thursday for a while (watch this space for news coming soon), brings you the joy of socks

When Dave Innell came to the board and announced that he’d found a play called Psychopathia Sexualis that he thought Gabriola Players should do in 2018, well you can imagine the reaction.

But then we read it and we had to agree that John Patrick Shanley’s play about love, friendship and one man’s peculiar attachment to a pair of Argyle socks was very funny indeed. Although to be honest, no one involved realised quite how funny it was until opening night when the Rollo Centre was filled with wave after wave of howling laughter. One audience member loved it so much she came to multiple performances!

In case you were unlucky and missed it, here’s the plot:

Ellie (Miranda Holmes), who can read him like a book, knows her husband Howard (Paul O’Sullivan) is keeping a secret. It doesn’t take her long to worm it out of him.

It seems their friend Arthur (Charlie Cheffins), who is about to marry Texas belle Lucille, is a sock fetishist. Said socks have been stolen by his evil shrink, Dr. Block. Arthur has begged Howard (who thinks he knows a thing or two about psychiatry) to see Block and get the socks back. Without them he is no longer a man and cannot marry Lucille.

Far from retrieving the socks and beating the psychiatrist at his own game, Dr. Block (Garry Davey) succeeds in destroying Howard’s self-esteem.

Ellie decides Lucille (Donna Deacon) has a right to know about all this before she ties the knot with Arthur. She manages to persuade her friend this fetish thing isn’t the end of the world. As long as they can get the socks back, Lucille’s marriage to Arthur can be filled with many more “experiences”.

Lucille, taking the bull by the horns, knocks the psychiatrist’s block off. (No surprise that Donna Deacon and her long-term partner Garry Davey chewed up the scenery in this scene.)

Socks and honour restored, it’s time for the wedding.

Click here to enjoy some memories of one of our most popular shows ever.

Oh, and PS: There must have been something about the sight of Donna in that wedding dress, because not long after the show Garry proposed and in September they were married. 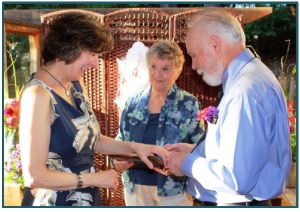