It’s been more than two years since the pandemic shut Gabriola Players down halfway through the 2020 One-Act Play Festival, but next month we will finally be back live. After four online shows, we are raring to play together again. 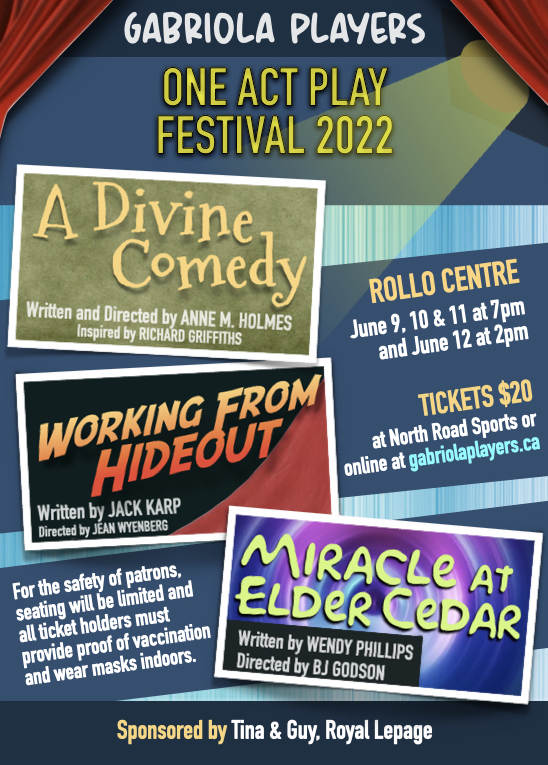 After last spring’s online “first read through” of A Divine Comedy, everyone agreed it was a shame we hadn’t been able to do the play live. Playwright Anne M. Holmes went back to the keyboard to create an expanded version of the play, which is now as much about the actors playing the roles as it is about the “play within the play”. Expect a great deal of backbiting humour from this group of theatricals before and after the read through.

Says Holmes, who is once again directing: “You can’t beat live theatre. From the very first rehearsal, watching this wonderful group of actors interacting with one another on stage has been an absolute joy.”

Miracle at Elder Cedar is the second play written for Gabriola Players by Governor General award winning author Wendy Phillips. As she describes is: “The word makeover takes on a whole new meaning when Ginny moves in to help her sister recover from surgery. Gwyneth is an online science sensation who works from her Gulf Island studio, and she knows exactly how to fix her underachieving younger sister, whether or not Ginny wants to be fixed. Can Ginny live down her past mistakes? And who is that mysterious woman in the woods?  This is a play about sibling rivalry, self-discovery and everyday miracles.” The play, directed by BJ Godson, features Wendy as Ginny, Helen Shillady as Gwyneth and Jenn Feenan as that mysterious woman.

When New York playwright Jack Karp submitted his charming, funny short play, Working from Hideout to us for consideration, we loved the concept. As director Jean Wyenberg explains: “We all now know what it is like to work from home, isolate, live by a different set of rules. We’ve been doing it for the past two years. But what if you are a superhero?  And you have been told you have to do your job from home? Well, that wasn’t in the job description and some superheroes adapt to the new reality better than others.” The play features Scott Rivers and Ray Appel.

We take the safety of cast, crew and audience members very seriously indeed. For that reason actors are rehearsing with masks on and will continue to do so until opening night.

And for that reason there will be limited seating at each performance. All audience members will be required to show proof of vaccination and to wear masks while indoors.

Tickets are $20 and are now available online here.